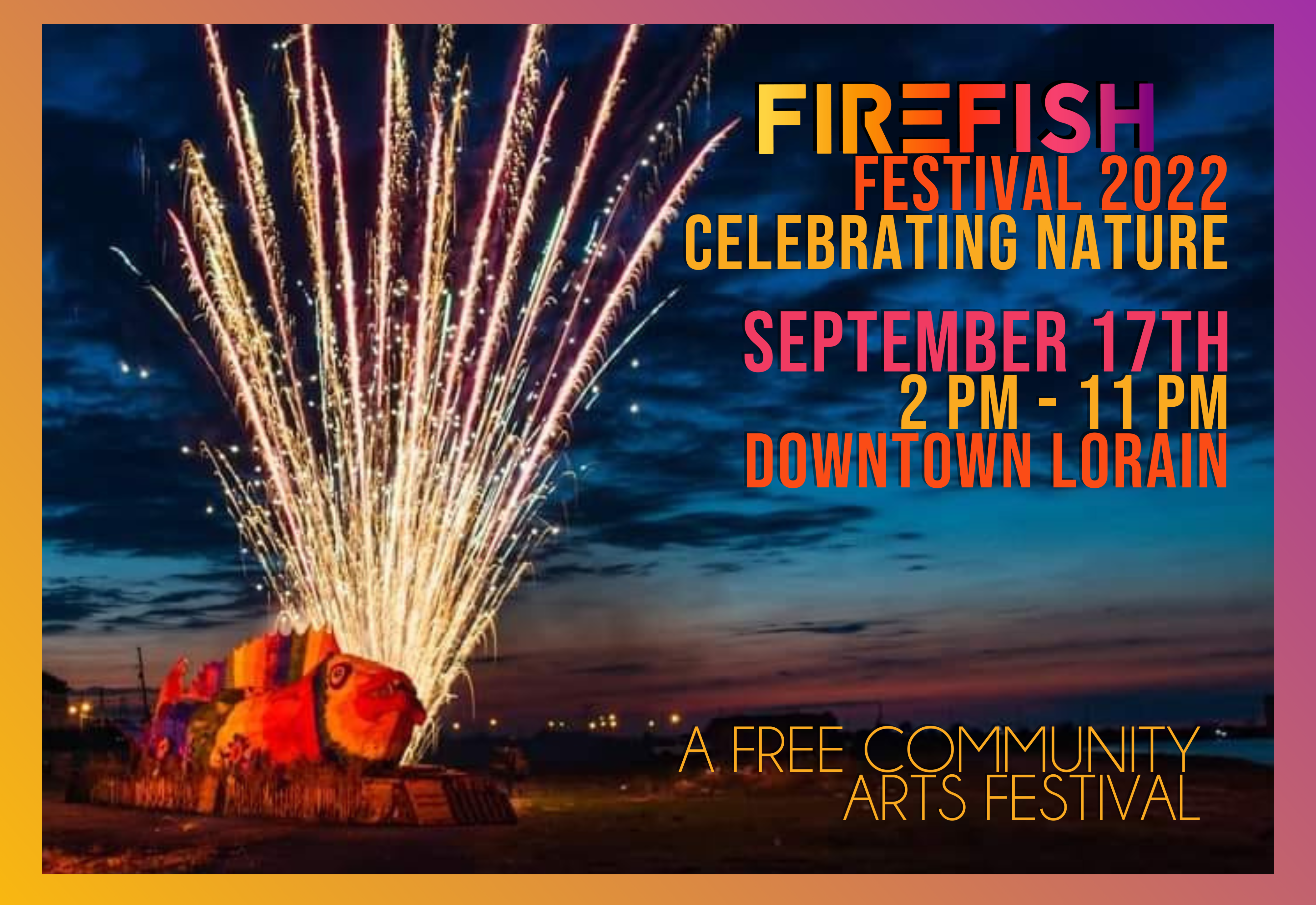 The Fire It Up! Festival Preview at the Broadway Block Party on September 2nd in downtown Lorain provides a more intimate “taste” of the FireFish Festival, featuring work from FireFish artists and previewing art experiences from the festival. This smaller, more condensed experience celebrates the early days of FireFish when festival programming artistically activated vacant storefronts and alleys of what was then an empty downtown Lorain.

Taking place from 4 – 10 pm in the alley by Speak of the Devil, the event features video projections by Hiatt Hernon and Ross Bochneck, fire performances by Ohio Burn Unit, and art activities that will spill out onto the sidewalk of 5th Street up to Broadway Ave and the corner of 7th Street.

The event also serves to kick off a longer-term mural project inspired by the Lorain native Jason Molina’s Ohia: Farewell Transmission lyrics. Launched with an inaugural design by Tommy Nickoloff, one of Molina’s friends, the evening will also feature music of Molina interpreted by local musicians. In addition to the festival preview party, the community can use our map and follow the trail of FireFish Pollinator Sculpture Garden Pots to visit FireFish artist businesses and art locations. 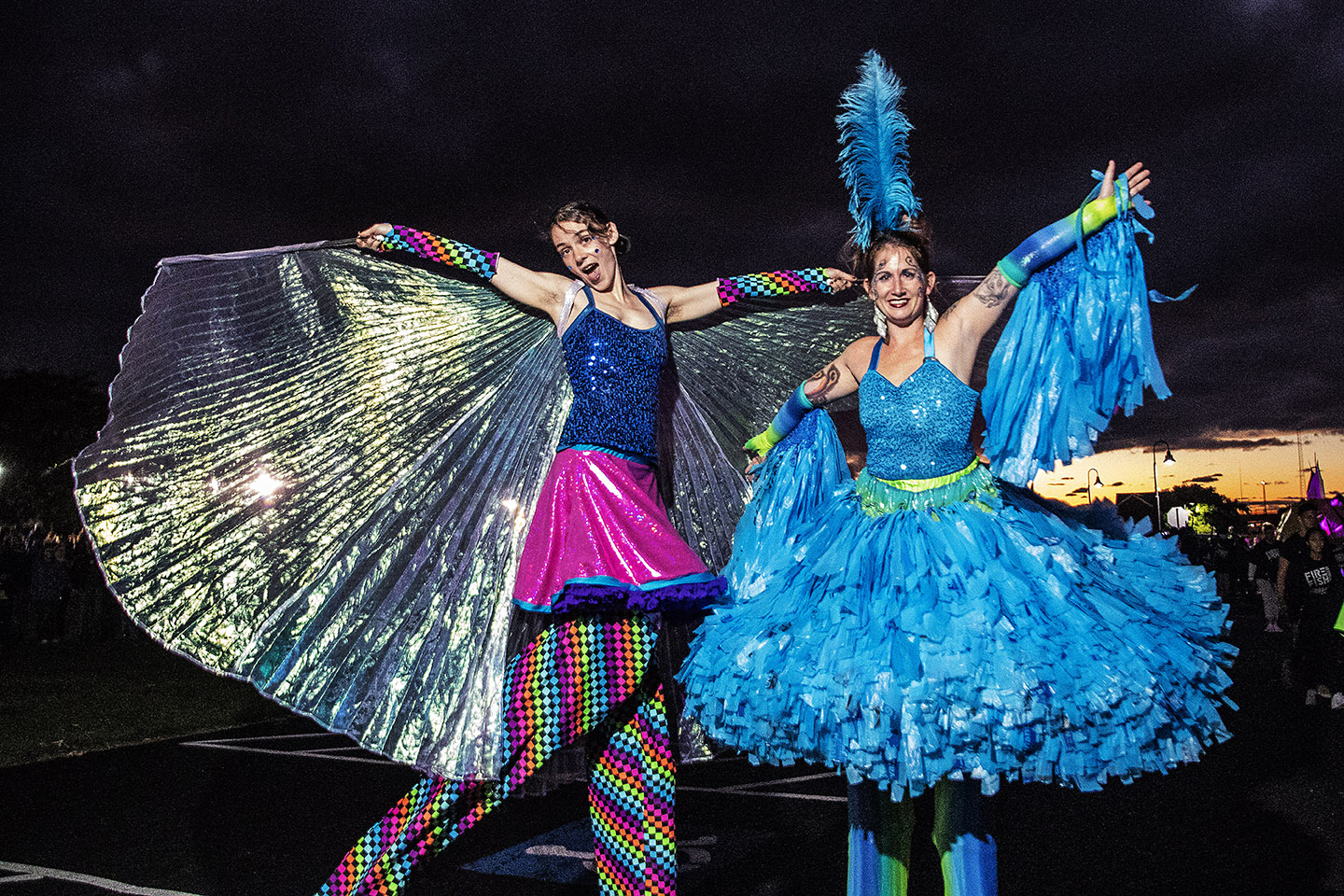 Always changing, this year’s FireFish Festival is shifting north from the downtown Broadway streetscape to the undeveloped former “pellet terminal” area north of Black River Lane. This new site reveals both the beauty and potential of Lorain’s Lake Erie and Black River waterfronts, providing a stunning natural backdrop for this year’s festivities. As always, the event promises unique art installations, food, fun, fire – and the much anticipated and signature burning of the FireFish with its parade and performance.

At the FireFish Festival site itself, visitors can also expect projections under the Bascule Bridge, pollinator sculptures near the new giant welcome to “Lorain” sign and the Marie Bonaminio Pollinator Garden, and all kinds of fun, art, and entertainment centered around the theme of the 2022 FireFish Festival: Fire, Rebirth, and our Connection to the Natural World. 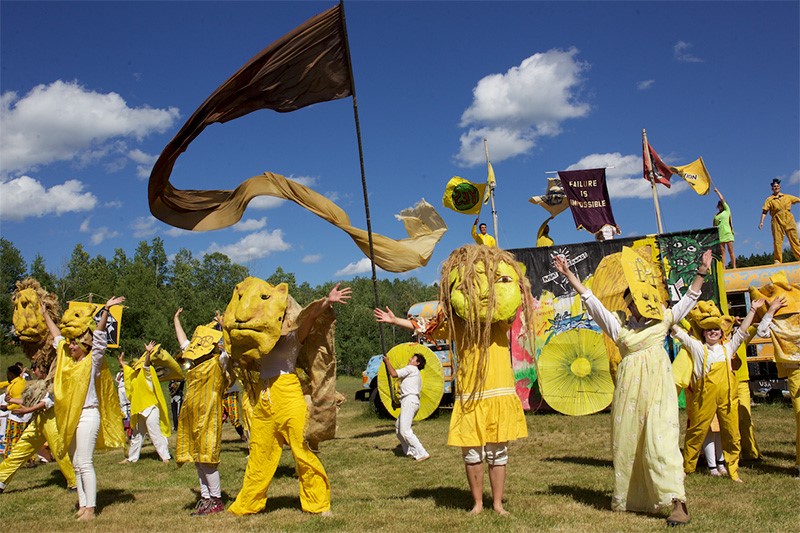 “The circus is coming! The circus is coming!” Our event headliner, the Internationally known and Vermont-based Bread and Puppet Theater, brings its iconic “Domestic Resurrection Circus” to FireFish with a performance starting at 4 pm. Believing that theater is a necessity like bread, the 59-year-old Bread and Puppet Theater brings its performance out into the streets to those who may otherwise not go to the theater.

Larger than life-size puppets inspired by cross-cultural traditions, often on stilts, wear huge masks with expressive faces, singing, dancing, and playing music. Participation in this play includes 20 – 30 Bread and Puppet performers, puppets, and stilt walkers, as well as youth from the ACES program and others involved in FireFish Arts programming, all performing against the backdrop of the famous Bread and Puppet traveling bus and Lorain’s stunning waterfront.

The James Levin FireFish Festival Parade, Finale Ceremony, and Burning of the Fish

A “Pied Piper-like” parade at dusk leads community members along with performers, puppeteers, musicians, fire performers, and drummers to the much anticipated and iconic annual James Levin FireFish Processional and Burning of the FireFish, taking place at sunset.

This year’s monstrous FireFish, built on-site during the week before the FireFish Festival, will embody elements of grotesque sculpture, characterized by fanciful and fantastic human and animal forms intertwined with foliage. Accompanied by flora and fauna in a ceremony of procession and performance on its phoenix-like journey of rebirth through fire, the FireFish becomes a decorative, fanciful, and fantastic caricature that represents the personal things that we would like to symbolically burn and release while looking toward new growth and the future of Lorain.

A celebration of music and dance will follow and continue until 11 pm.