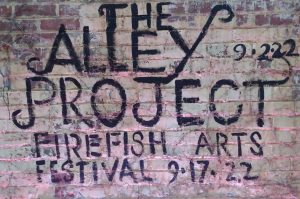 The Alley Project held on Friday, September 2nd in downtown Lorain by Speak of the Devil, featured video projections by Hiatt Hernon and Ross Bochnek, fire performances by Ohio Burn Unit, and art installations that are temporarily placed in the alley, including the “Broadway in Bloom” mural by Ryan Craycraft, art by Jeff Pye and Start with Art, garden pots by Black River Farmstead’s Joshua Biber and Brytny McCall and other FireFish artists and from the FireFish art collection.

The event kicked off with music by Jason Kaminski, an artist based in Ohio. A local of Elyria, Ohio Jason has long been a prominent driving force behind Lorain County’s local music scene. Kaminski and his band will be followed by a video projection of “Erie Days” – a temporal gallery projection by Hiatt Hernon. Inspired by the cinematic curiosity of the 1920’s ‘city symphony’ short films, Erie Days is an attempt to capture the spirit of experimentation of early cameras.

According to FireFish Arts Executive Director Joan Perch “our focus is to: elevate local artists as paid professionals, bring art to underserved youth, and to drive the growth of our downtown Lorain through arts based creative placemaking.”

Lorain: Portrait of a City Project

The Lorain: Portrait of a City project is a two-year program that features both traditional and non-traditional “portraits” of Lorain, with multiple components. The program emphasizes arts-based storytelling related to the history of Lorain, its’ people, and the community with a public art component that celebrates the community and work of the project and its participants.

An arts education/enrichment project, the focus is on working with local artists that teach and mentor high school and college artists apprentices in the creation of a work of art that tells the story of Lorain.  The “portraits” created as part of Lorain: Portrait of a City will utilize traditional and experimental media, including painting, photography, video, murals, gallery installations, projection, fashion, and puppet making. Throughout the creative process, we will challenge what constitutes a portrait and how we honor and express the essence of Lorain. Apprentice participants will also create related independent art projects under the guidance of the mentor/teaching artists. 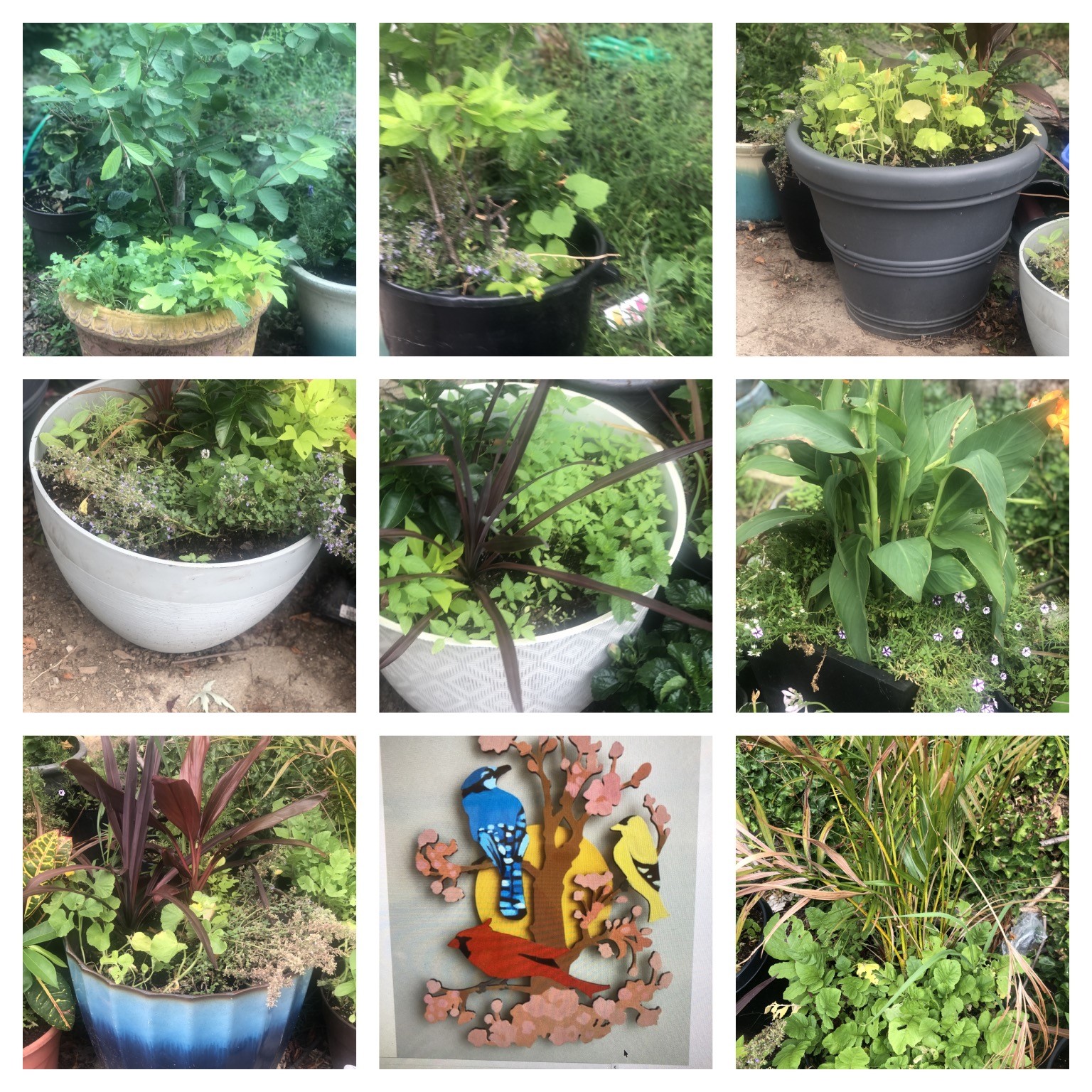 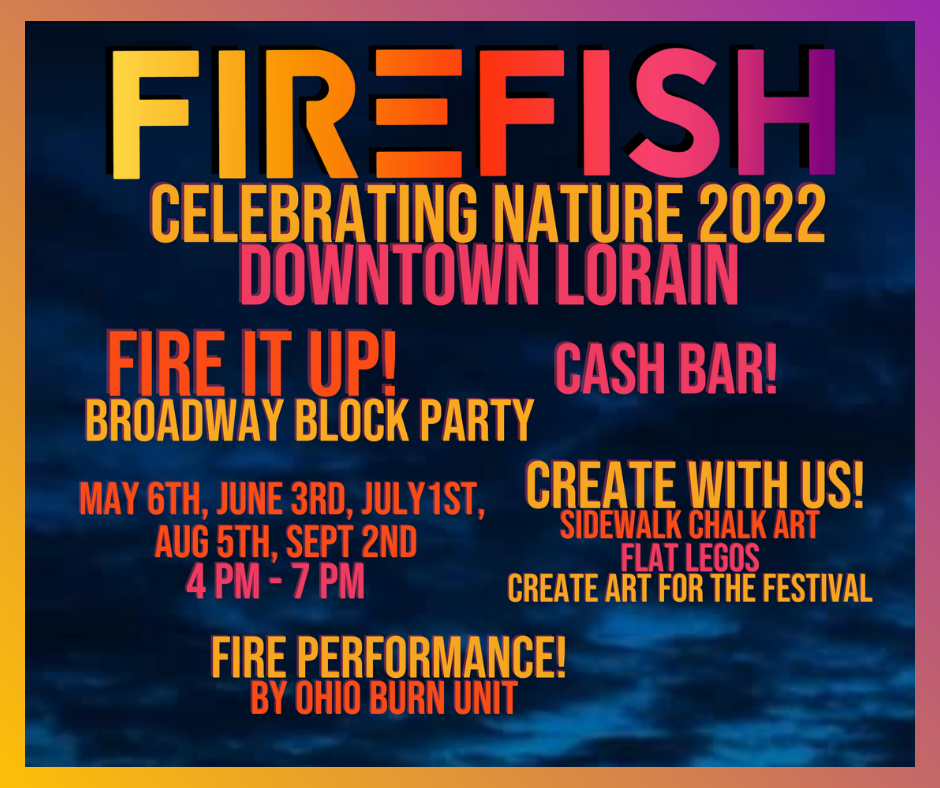 Located at the corner of 7th Street and Broadway Ave on the first Friday of every month during the summer. Main Street Lorain host the Broadway Block Parties on First Fridays and provides live music and vendors and the businesses downtown offer specials for people walking up and down Broadway Ave in downtown Lorain. The Fire It Up! booth has fire performers, a cash bar, and a special art experience at each event. 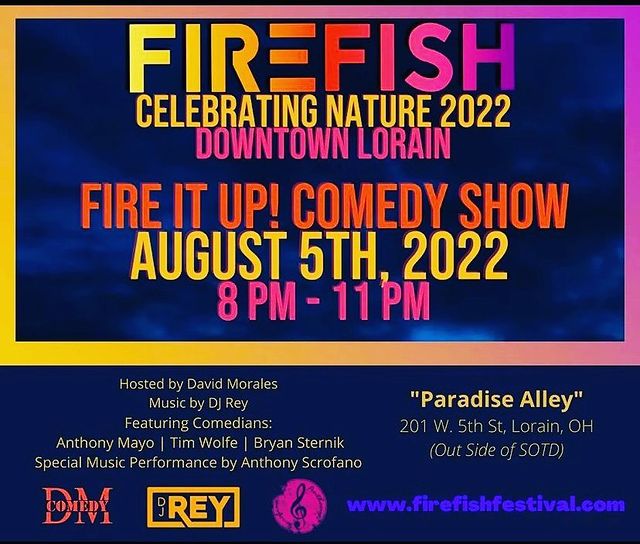 FREE Comedy! FireFish Artist Board Member David Morales hosts a free comedy show during the monthly Fire It Up! Broadway Block Party downtown Lorain on Friday, August 5th in the alley by Speak of the Devil (201 W. 5th St.). The show is from 8 – 11 pm. Music will be provided by DJ Ray and Anthony Scrofano, with comedy performances by Bryan Sternik, Tim Wolfe, and Anthony Mayo.

Inspired by the cinematic curiosity of the 1920s ‘city symphony’ short films, Erie Days is an attempt to capture the spirit of experimentation of early cameras. Shot entirely on the latest GoPro technology with an emphasis on time-lapse photography the frames and minutes accelerating by from a stationary position—the project soon began to evoke the feeling of time displacement felt during lockdown over the last two years.

‘Erie’ is a name taken for the street I live, the lake I would see every day, and the days spent there as time would seem to go by slow and fast simultaneously. As things have restarted at different paces, these feelings have begun to drift into memory but came back working on this piece purely accidentally. Even so, the process of exploring with this video was a super enjoyable one, and I hope that is felt by viewers too.

FireFish Artist Board Member Jeff Pye and the Start W/Art program focus on creating painted portraits of notable people from Lorain. Local student artists will collaborate with Lorain artists to create these portraits. The exhibit will open on Friday, September 2nd during the Fire It Up! Festival Preview at the Broadway Block Party and stay open through the festival. This program is a part of the “Lorain: Portrait of a City” project.

FireFish Arts “Patterns of Time” quilts together Lorain’s culture in a large-scale kaleidoscopic art projection in downtown Lorain from February 12th through the 26th. A visually exciting interactive outdoor digital projection by Visionary and New Media Artist Ross Bochnek. Inspired by the garments featured annually in Lorain’s International Festival, this large-scale public kaleidoscopic event visually “quilts” together the many cultural and ethnic groups of Lorain in a large-scale art projection on the corner of Broadway Avenue and 7th Street.

Using visuals inspired by both textiles and the contributions of diversity to the community, “Patterns of Time” creates a dancing digital fabric stitched and woven together into a geometric transformation. Creating an almost dizzying incandescence, “Patterns of Time” reflects on both the past and the future of Lorain’s International City. The projection includes 1970’s era photos of the parade’s traditional clothing, people, and downtown Lorain, all scanned from the archives of the Lorain Historical Society.

Images included in “Patterns of Time” are from the Lorain International Festival photographs in the John Milas Collection courtesy of Lorain Historical Society and OhioMemory.org.

FireFish Arts is pleased to announce a group exhibition exploring the creative possibilities of paper as the primary means of artistic expression held in downtown Lorain from March 18th through the 25th. This will include origami, printmaking, installation, drawing as well as new and inventive ways of working with paper. The show is co-curated by Jason Shaffer and Ryan Craycraft who will both be participating in the exhibition.